Warning of a scam from travellerpoint(dot)org

A few participants have warned us that they have received an e-mail from a company called travellerpoint(dot)org.
This company is NOT in any way affiliated to the ESSHC 2023 conference.
This company sends unsolicted e-mails to conference participants (not only ESSHC but also other European conferences) hoping that participants will use their services for finding accommodation. Please do not contact them, please do not provide them with your personal information.

We want to emphasize that ESSHC did not provide the participants' e-mails to this company. ESSHC only works with a few companies e.g. Conference Compass (the conference app), Reference Technology (printing of badges) and for the 2023 conference with TravelTeam (hotel accommodation) in Sweden.
Also ESSHC does not publish participant e-mails online (only network chairs' e-mail addresses are published).

On our website under hotels you can find more information how to find accommodation in Gothenburg.

If you can, please block the sender @travellerpoint.org in your e-mail program.

Looking forward to seeing you in Gothenburg.

The preliminary programme is online!

The preliminary programme is now available.

The deadline for sending in your paper and session proposals is April 15!

We have decided, after much consideration and in consultation with the Advisory Board and the network chairs, to postpone the congress for a year to 2023.
The 14th European Social Science History Conference 12-15 April 2023 is organized by the IISH in co-operation with the University of Gothenburg, Gothenburg, Sweden.

The aim of the ESSHC is bringing together scholars interested in explaining historical phenomena using the methods of the social sciences. The conference is characterized by a lively exchange in many small groups, rather than by formal plenary sessions. The conference welcomes papers and sessions on any historical topic and any historical period. It is organized in 27 thematic networks.

PhD students are invited to enter their paper for the Prof. Jan Lucassen Award for best paper by a PhD student in the conference programme. 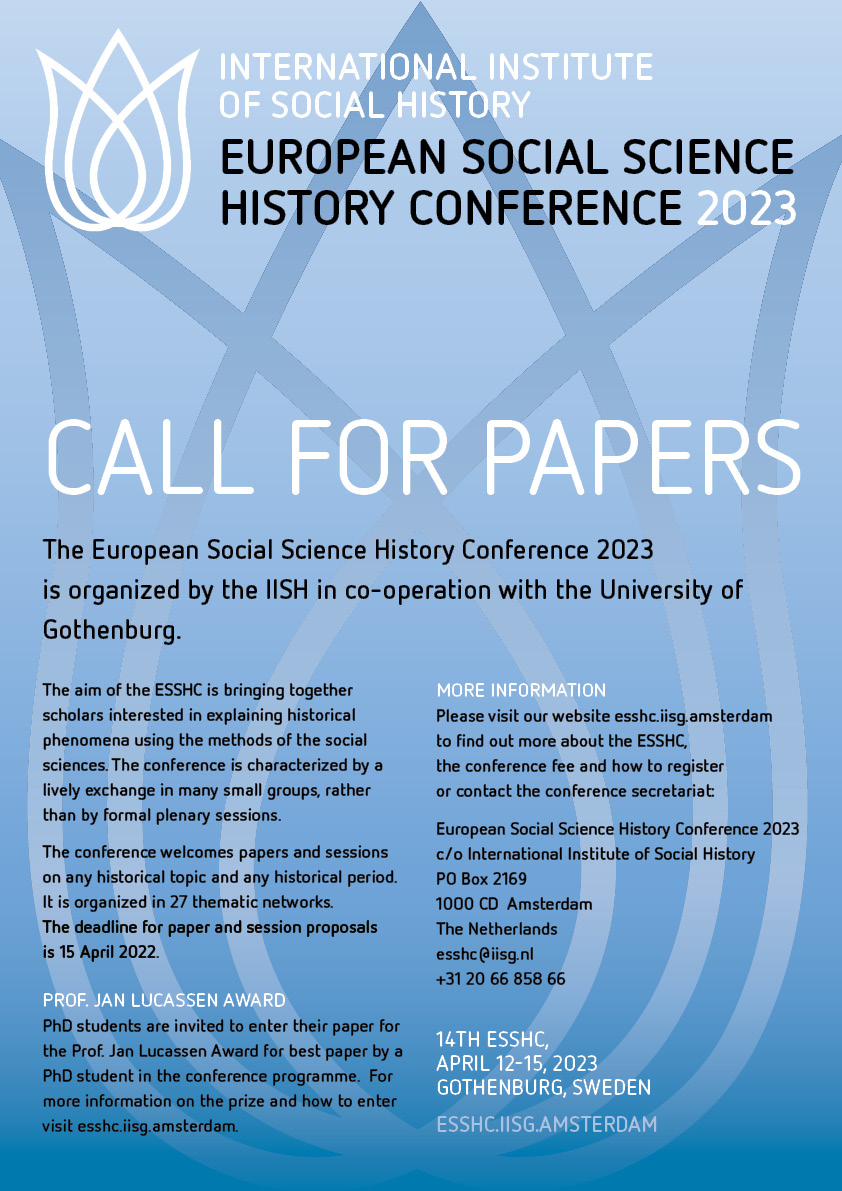 We have very sad news to report. Thomas Welskopp, chair of the Network Theory and Historiography, has passed away. He will be dearly missed. More information on his live and work can be found here 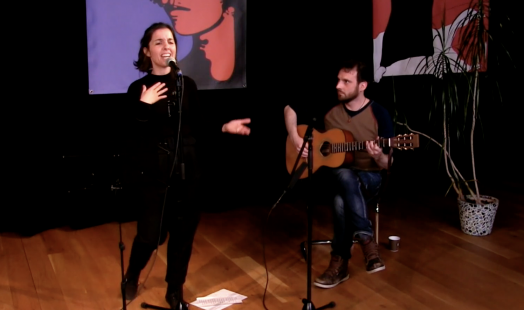 For the first time in the history of the ESSHC, the conference had an opening ceremony, with two cultural performances.

Director of Research of IISH Karin Hofmeester welcomes the viewers, after which there is a performance of Spanish singer - and colleague - Almudena Rubio with 'songs of love and rage'.

This will be followed by a presentation of the artists in residence at the IISH - Milena Bonilla and Ana María Gómez López.

You can view the ceremony here. 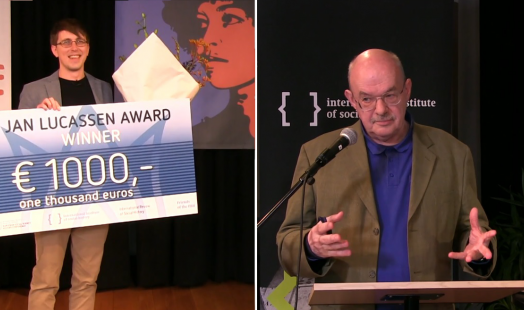 On 25 March Marcel van der Linden, fellow at the Institute, held a keynote lecture during the ESSHC.

You can view the filmed keynote lecture "The hidden rules of academic life" here via this link.
The text of the keynote can be found here

Before the keynote, Mark Hup from the University of California (Irvine) was granted with the Jan Lucassen Award 2020 for his paper: Corvée Labour and State Expansion in Colonial Indonesia.

This year’s Jan Lucassen Award goes to Mark Hup from the University of California (Irvine), where he is preparing his PhD thesis in economics under the guidance of Professor Dan Bogart.

For his paper: Corvée Labour and State Expansion in Colonial Indonesia

From the jury report:
“The paper, which engages with labour history and economic history, is well structured, clear in the methodology used that combines social sciences and history. We find here an excellent combination of empirical historical research and social science theory and techniques. Besides, the theoretical premises are not as narrow as in much econometric-statistical research, but here they encompass both economic, social and political motivations, and Hup shows how to disentangle these.”

“Mark will receive the prize because he critically combines theory and history, he builds a new database proxying the expansion of the State with some variables such as the density of the state officials, the availability of wage labour and the industrialization process.”

The Jury also awarded two honourable mentions to
– Henning Bovenkerk for his paper: Silk for Peasants? Global goods in rural households in the 17th and 18th century Northwestern Germany
and
– Emmanuel Falguières for his paper: Land Ownership as a Social Practice in the United States. A Case Study from Kansas, 1870-1930

You can read the full jury report here